In 2008, Edina was successfully appointed to install a turnkey 1MWe combined heat and power (CHP) plant at Green Isle Foods. 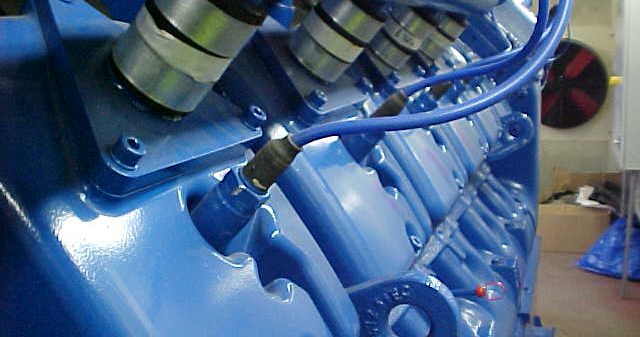 Following a feasibility study and energy review of their site, the 12 month data analysed discovered an electrical requirement of over 2500kWe and a thermal load of 3000kWt. In order to size the most appropriate and efficient system, the CHP outputs were closely matched to the site demand, hence providing the greatest energy cost savings and return on investment.

This CHP project consists of a 1MW natural gas MWM manufactured TCG 2020 V12K engine which supplies the site base electrical load by operating in parallel with ESB’s medium voltage network. Electricity from the CHP unit is generated at 400volts, stepped-up via a transformer to 10,000 volts.

The scheme includes heat recovery from the first stage intercooler, lube oil, jacket water and exhaust gases. An exhaust gas steam boiler is installed to provide steam at 6 bar into the existing boiler system. Thermal energy is recovered from the engine, in addition to which exhaust heat is also recovered via an Economiser which cools the exhaust gases from 190 – 120 degrees Celsius.

The module is controlled with a MWM Total Electronic Management: The TEM-Evo-System manages the fully automatic operation of the gas engine module. This sophisticated controller governs and monitors all parameters for the gas engine module and all its related site elements, such as heating circuit and dry air coolers to provide high operating safety and optimized efficiency. Edina supplied the complete plant synchronising and control system.

An additional Edina panel controls the auxiliaries and communicates with the Green Isle BMS (Building Management System). Edina maintenance can monitor the unit remotely from its head office in Dublin and provide necessary support as required under a maintenance contract, thus ensuring the highest possible reliability and availability of plant.

In conclusion, the CHP plant is expected to reduce electricity imported from the grid by at least 30 per cent. This will reduce energy cost and maintain power security at site.

In conjunction with the economic advantages, the CHP plant has important environmental benefits. When compared with power produced by conventional power station, the CHP plant will reduce the site carbon emissions by 9,730 tonnes per annum. This is approximately equivalent to removing 2,600 cars off the road each year, or the equivalent of planting 11,800 new trees for every year of the CHP plant’s lifecycle.