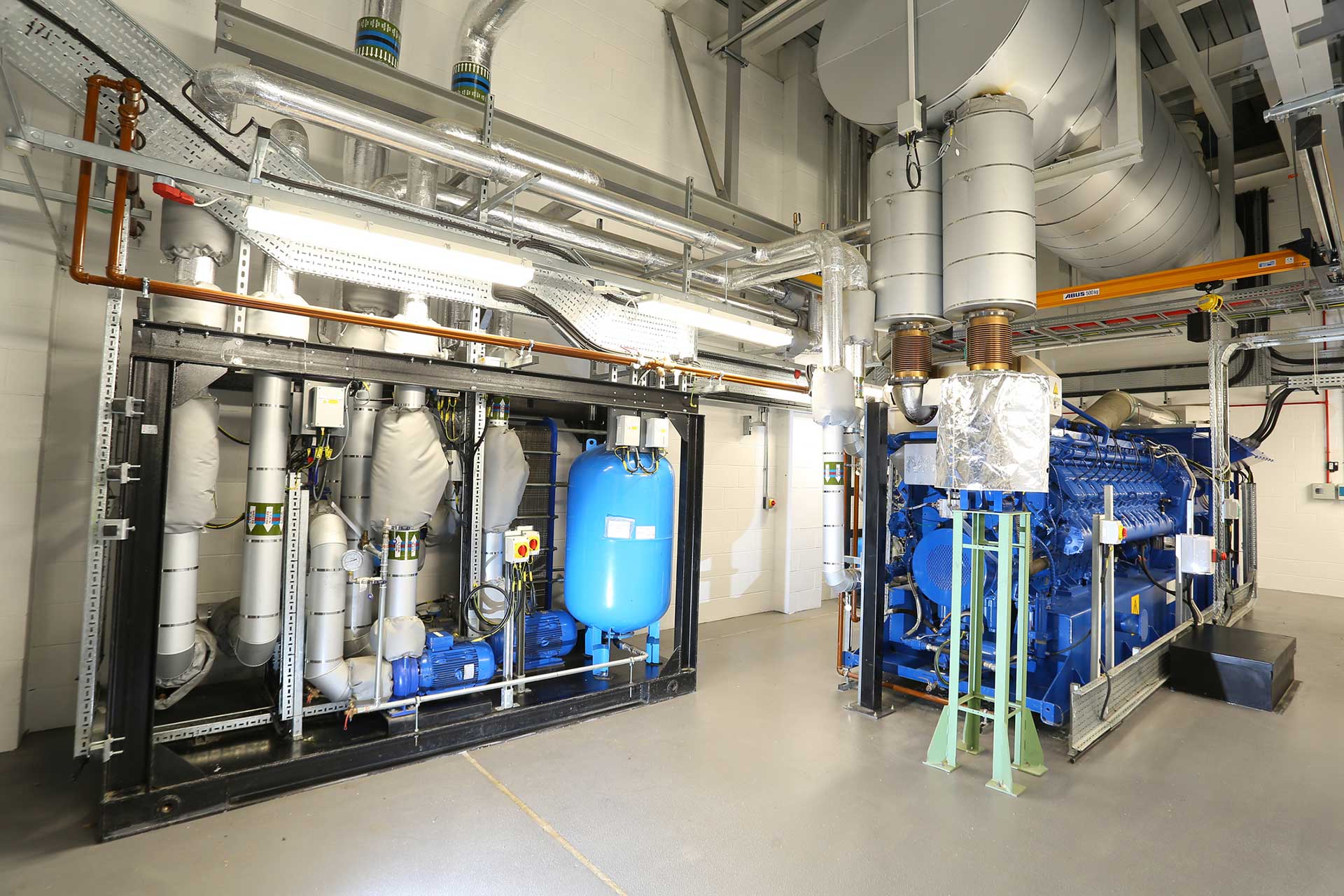 What is Combined Heat and Power (CHP)?

Combined Heat and Power (CHP), also known as cogeneration (cogen), is the most efficient and cost-effective method of using a single fuel to simultaneously produce electricity and heat/cooling at the point of use.

Edina's MWM gas engines can achieve efficiencies of 90% – almost twice as efficient as using electricity from the grid and heat from on-site boilers.

CHP cogeneration can deliver cost savings of up to 30% and rapid return on investment of 2-5 years. That is due to exceptional efficiency, but also because electricity can be generated from natural gas at a cheaper rate than purchasing it from the grid because wholesale gas prices are significantly lower than power prices.

Read our guide to CHPQA assurance and CCL exemption.

How does CHP work?

Most CHP systems use natural gas as a fuel. During combustion, mechanical energy is released and converted into electricity via the alternator.

This is similar to the process used in traditional gas power stations, but unlike unabated centralised conventional power plants, decentralised CHP systems recycle the excess heat that is released a by-product of power production. Recovered heat can then be used for space heating, hot water, steam and industrial processes. 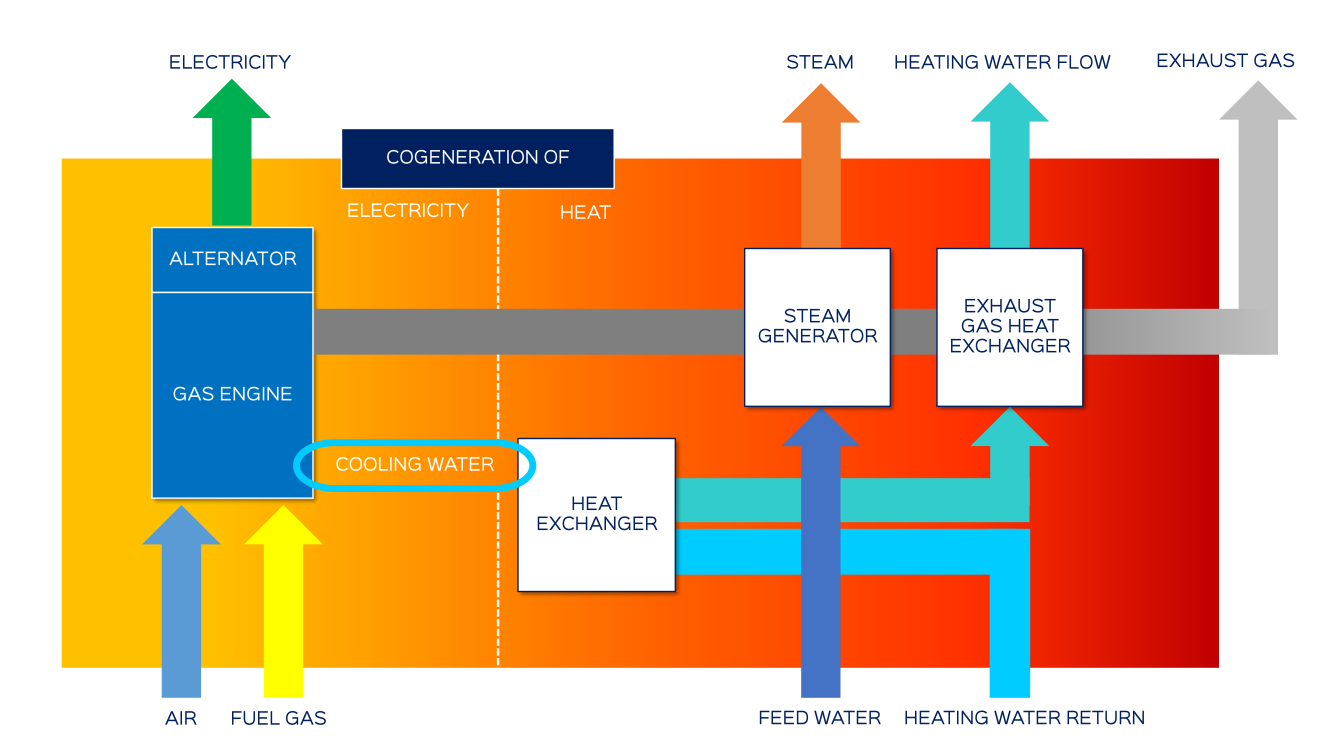 Further power efficiencies are achieved because the cogenerated power is produced and consumed on-site, avoiding the transmission losses of around 7.5% that occur in transporting electricity from remote generators to consumers.

Recovered heat from CHP can also be used to produce free cooling when it is set up in trigeneration mode. In these instances, an absorption chiller is connected to the Combined Cooling, Heat and Power (CCHP) system so that waste heat can instead be used to produce chilled water for process cooling, refrigeration and air conditioning. 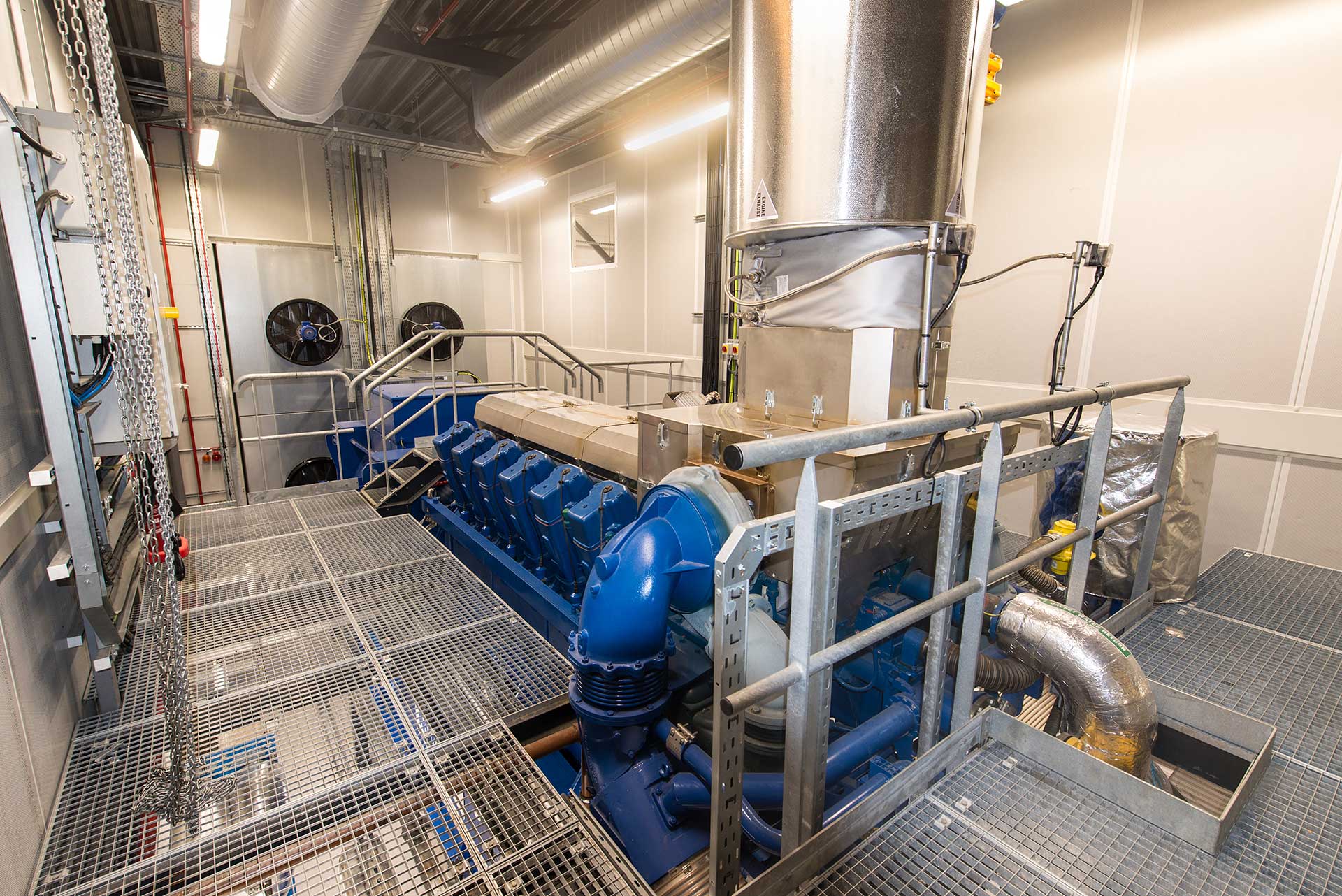 The benefits of gas engine CHP

High electrical and thermal efficiency of up to 90%

Fast project set up and installation

Natural gas is typically the main fuel used with a CHP plant, however, alternative fuel sources such as renewable biogas from anaerobic digestion and non-conventional gases are also used within cogen applications

Cogeneration and trigeneration offer a range of benefits for organisations across many sectors, assess the suitability of your site with our free Feasibility Study and Energy Review

By flexing CHP generated power, businesses can draw on grid power when it is cheapest and to use their self-generated power at peak times

Effective servicing and maintenance are essential to ensure high availability and efficiency of CHP systems, helping to maximise cost and carbon benefits

Natural gas is typically the main fuel used with a CHP plant, however, alternative fuel sources such as renewable biogas from anaerobic digestion and non-conventional gases are also used within cogen applications.

CHP makes a major contribution to the UK energy mix, generating around 7% of total electricity supply, according to the latest government data.

Cogeneration and trigeneration offer a range of benefits for organisations across many sectors, including: manufacturing, industrial, pharmaceutical, food and drink processing, data centres, hospitals, education, sewage and wastewater treatment, commercial and agriculture.

Major energy consumers operating in competitive global markets, including manufacturers and companies involved in industries like chemical, oil and gas and paper and publishing can often derive huge benefits from CHP. Collectively, companies in these sectors account for a significant majority of cogeneration capacity in the UK.

Sites with a high and consistent heat/cooling and electricity load profile can maximise CHP savings due to high efficiency. However, the strong economics of gas-fired CHP engines means that many sites with a smaller demand profile and lower heat demand are also suitable.

To assess the suitability of your site, register your interest for our free Feasibility Study and Energy Review.

CHP systems can be installed in both existing and newly-built facilities. Cost and efficiency advantages are usually greater when a cogeneration or trigeneration solution is planned in the earlier stages of a project.

The best time to plan a CHP system is usually when:

To maximise the efficiency and cost and carbon savings, it is critical that a gas engine cogen plant is correctly sized and installed. Incorrect sizing is the number one cause of sub-optimal CHP performance. Specifiers need to consider many variables - from energy demand profile to site requirements when sizing a CHP unit.

Read Edina’s guide on how to size a CHP unit.

By flexing CHP generated power, businesses can draw on grid power when it is cheapest and to use their self-generated power at peak times. This means that they can avoid peak-time cost, such as Triad periods, when prices are vastly inflated.

Gas power generation systems can also be combined with battery storage to optimise flexibility and generate revenue from Demand Side Response markets.

Effective servicing and maintenance are essential to ensure high availability and efficiency of CHP systems, helping to maximise cost and carbon benefits.

Find out more about servicing

Why choose Edina as your cogen partner?

Edina is a market-leader in the engineering, installation and maintenance of cogeneration power plants and the exclusive distributor of high-efficiency MWM gas engines in the UK and Ireland.

We can either supply a single engine only or deliver the full EPC contract to include design, build, engineering, project management, integration of auxiliary equipment and balance of plant, engine commissioning and full 24 hours a day, 7 days a week, 365 days a year service and maintenance of the equipment over a 15-year life cycle.

Across our 35-year history we have requisite knowledge across the design, engineering, project management and maintenance of gas-engine fuelled power plants and have a growing installed capacity of over 630MW electrical across the UK, Ireland, Australia and India.