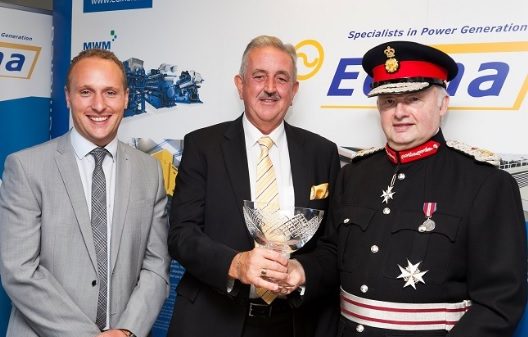 Edina Group were delighted to receive Her Majesty the Queen’s representative, the Lord-Lieutenant of Greater Manchester at the Stockport office on 22nd July where he presented the Directors and staff with a ceremonial bowl to mark the company’s success in the Queen’s Awards for Enterprise, Innovation.

The Lord-Lieutenant toured the premises and met staff before the ceremony to learn more about Edina’s role in power generation from anaerobic digestion and combined heat and power systems.

In his speech, the Lord-Lieutenant explained the importance of the Innovation award – only 39 UK companies having received it this year.

The Queen’s Awards are for outstanding achievement by UK businesses and were created in 1965 (then known as the Queen’s Awards for Industry). Joint Director of Edina Group, Tony Fenton said it was the company’s proudest day and gathered staff together with a celebratory lunch to mark the occasion.

Founded in Ireland in the 1980’s as a business supplying diesel generators, Edina now also specialises in power generation and renewable energy from biogas following the anaerobic digestion process and the supply of combined heat and power systems from natural gas. The company is the UK and Ireland partner of MWM (Caterpillar Energy Solutions), the Perkins distributor in Ireland and manufactures its own containerised solutions in the UK for energy projects at home and for export.

The office of Lord-Lieutenant is military in origin and stems from the reign of Henry VIII. Mr. Warren Smith has held office since 2007 following considerable service as a Deputy Lieutenant and High Sheriff. Today the role is to “follow the example of Her Majesty the Queen as he seeks to promote a good atmosphere and spirit of co-operation by the encouragement he gives to voluntary service; benevolent organisations; and by the interest he takes in the commercial and social life of his county”.

Edina now employs 160 staff with a fleet of engineers covering the whole of the UK and Ireland. 2014 has been a great year for Edina with the opening of an Australian office and further awards for its products. Further orders for cost-saving CHP installations, district heating and waste to energy plants have been placed, ensuring continued and sustained growth at the company.

These Stories on Awards