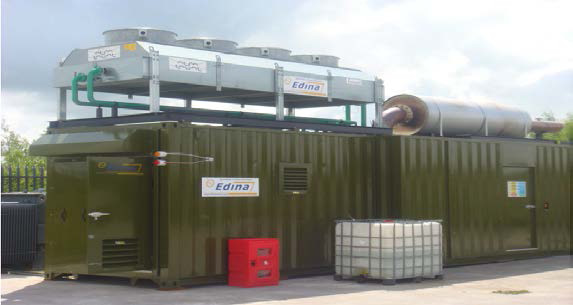 Edina CHP generates over €600,000 per year in electricity at waste to energy facility Gortadroma Landfill

Edina was approached by Limerick County Council in an effort to source a 1,000kWe landfill gas generator set at short notice. The Council had secured a grid connection for 3MW of power generation at the Gortadroma landfill site in South County Limerick.

Gortadroma is one of the largest landfills in the South West of Ireland, receiving municipal waste from the surrounding areas of Limerick City, Kerry and parts of Cork.

The site receives 130,000 tonnes of waste for disposal and 77,000 tonnes for recovery. Initially the site was flaring gas, a necessary means of disposing of the gas which is a by-product of waste disposal in landfill and a harmful greenhouse gas, thereby burning a valuable fuel source for power generation.

Aware of the possibility to generate revenue from methane and keen to prevent release into the atmosphere, the council invested in the required infrastructure and grid connection, including 7km of 20kV pylons.

The daily loss of revenue was around €2,000 so the council was keen to make rapid progress with the project.

As the official distributor for MWM gas engines in the UK and Ireland, Edina was successful in securing an MWM TCG 2020 V12 engine from the factory on a short lead time and set in place an ambitious build schedule. The unit selected consisted of a 1000kWe lean burn Miller Cycle gas generator set, containerised with all ancillary systems packaged inside the enclosure. The unit generates at 400 volts and steps up to 20kV via a local transformer, also supplied by Edina. This provided the optimum solution for a short delivery and installation time together with an easily serviceable and safe installation.

Landfill gas contains many corrosive elements and can cause premature component failure within an engine. As a result, many engine manufacturers will not offer warranty if their engines are operated on landfill gas. MWM engines are designed to operate in the harshest environments and will run effectively on a variety of gases. MWM`s advanced miller cycle design means that they offer higher electrical efficiency when compared with other prime movers, which in turn equates to higher revenues for the user.

The CHP installation at Gortadroma Landfill generates energy from waste, and the electricity produced is then exported back into the electricity grid for revenue. The CHP project also reduces emissions that otherwise would have been released to atmosphere.