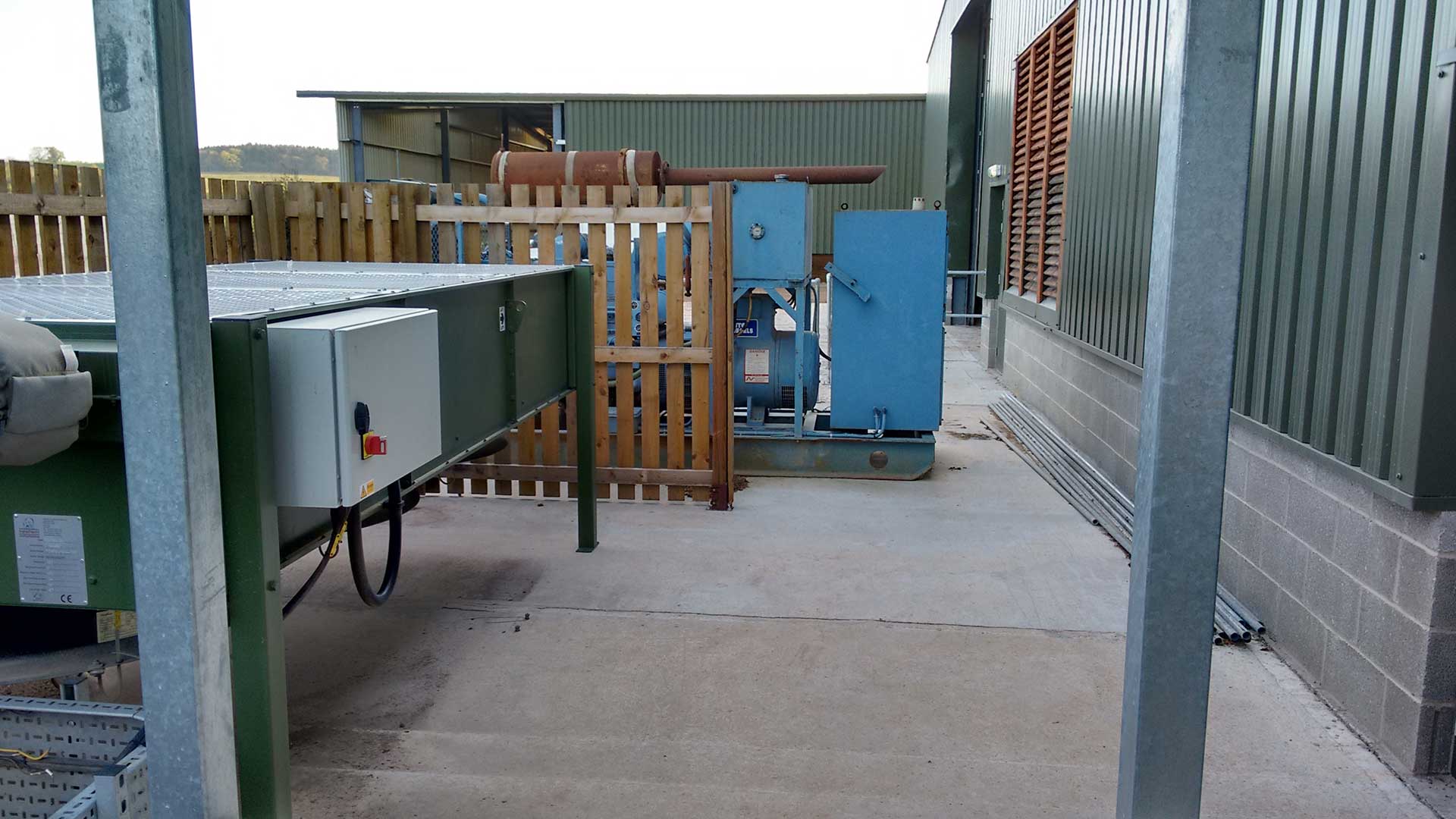 Springvale Farm, Managing Director, Nigel Bloom, sought funding to build an Anaerobic Digestion (AD) plant on the 130 acre land as part of an ambitious project to generate energy and become self-sufficient from the National Grid.

The farm is in open Nottingham countryside and has a listed building 200 yards from the proposed AD site. Nigel obtained planning permission working with his proposed suppliers Binowa, designing a partially buried Centrigas ring in ring plug flow digester with vertical gas mixing.

The AD plant is partially buried and designed to reduce visual impact, and the Edina containerised generation sets were installed in a steel-framed building. Grid connection and FIT pre-accreditation was obtained.

The first major problem was funding. Although in 2013, with a significant number of the AD plants built, the banks would not take the expected income generated from an AD plant into account for the finance.

Nigel investigated the possibilities in securing finance through crowd funding means, and soon made an application through peer to peer business loans company, ThinCats. Within 9 hours of the project live date, Nigel had secured the necessary funding from 400 investors to put his ambitious plans into practice.

Edina were awarded the contract to supply, install and maintain the MWM manufactured TCG 2016 V12 500kWe biogas CHP plant. The biogas fueled combined heat and power (CHP) plant was containerised at Edina’s manufacturing plant based in Lisburn, Northern Ireland and housed within the AD plant energy and process building.

With the standard noise attenuation of the Edina container once outside the building, the generation set can hardly be heard, which is ideal for the nearby listed building, and the farm diversification into lodges.

Following the successful installation and operation of the TCG 2016 biogas CHP in November 2014, Springvale Farm ordered an additional 600kWe engine, which was also installed within the sites energy and process building. This unit was commissioned at the end of December 2016 before the tariff change on plant extensions.

At the end of January 2016, the new second biogas CHP reported an engine uptime of 99.7%, which is truly staggering, after the rapid installation in December 2015. This builds upon the impressive performance of the first installed and running engine. The first engine in the recent 12 month period from February 2015 to March 2016 had an engine uptime of 99.0%, an availability of 99.5% and a power production availability of 96.3%.

Attention to detail on the small things ensures optimum operation of the plant, and only use what is needed. The AD plant was designed from the start for low visual and noise impact. The storage of feedstock away from the site in the field where it has grown minimises traffic disruption. Especially the maize harvest where traffic movements are large and the inevitable mud on the roads is eliminated. Ag bagging increases the feedstock density over just harvested maize, hence each load trailered to site is around 15 tonne rather than 11 tonne of fresh maize. Reducing all road movements for Maize by a third compared to other plants.

Heat and Power use

As part of the Springvale Farm diversification, Nigel is building rental lodges around the seven fishing lakes on the farm. With 13 currently built and the remaining 53 underway, the site houses a Café restaurant and two shops.

These are powered from the AD plant with a mini district heating loop providing heat to all properties replacing the bottled gas previously used, and excess power fed to the grid. The remaining heat is used in an innovative fish farm where carp are grown for the table, the warm water significantly increasing the rate of growth. This niche product has not been produced in the UK before; the nearest supplier was in France.

The principal feedstock used are beets and maize. These crops are grown on the site and neighbouring farms.

In addition, over 700 tonnes of grass clippings are collected from the 130 acre fishing lake site and fed daily, with grass offering a better yield of 1.5 over maize.

The maize is harvested and stored to maintain the highest available energy in the crop. Rather than harvesting and transporting the crop to a large silage clamp on the site, Nigel ensilages the maize crop in the field using 3m diameter Ag bags. Ag bagging significantly reduces the crop fermentation in the silage by sealing the crop in the bag. Rather than in a clamp where air is always entering as the clamp is used. This increases the biogas yield per tonne of stored maize. The Ag-Bags are stored in the field where the maize is grown and are only collected when required by the digester.

The Beet is only harvested when required between September and May. They are washed in the field. Hence there is only 6 weeks currently without beet. Nigel is to experiment with Ag bagging beet this year for all year round supply.

The digestate is separated into solid and liquid with it all returned to the land for growing the feedstock. No additional fertiliser is required and surplus digestate is sold to neighbouring farms for £2/tonne plus spreading costs. Demand for the digestate is greater than supply.

The surrounding farmers are keen to obtain feedstock contracts for growing the maize as it has a beneficial effect on their land, not only would they get the digestate but a three year maize rotation is able to significantly reduce certain plant pathogens as well as the blackgrass endemic in the area. The pathogens are blight on potatoes and blackspot on carrots.

It is demonstrable that the growing of maize, as a fuel, is benefitting the local farming community.

The optimal design and operation of the plant means it has one of, if not, the lowest parasitic power requirement in the industry. For the production of 500kWe of electricity, the whole plant (AD and CHP) used just over 30kWe, approx. 6%. This percentage will reduce with the introduction of the second generator.

After power usage for on-site for farm diversification, the remainder is sent to the grid. All the heat (after the digester) is used for heating lodges, with the main use for heating the fish farm. These are direct displacements for fossil fuels and not indirect heat uses for RHI, such as drying to reduce digestate transportation costs. The sustainability criteria for the agricultural crop feedstock is very low. The digestate is used as fertiliser so no artificial fertiliser is applied.

The gas yield is high due to the Ag bag silage approach making the most gas production out of the feedstock. The transportation greenhouse gas (GHG) emission is reduced due to the storage on-site and reduced movements due to transporting the denser silage, and the optimal plant operation mentioned reduces parasitic load.

To put into context, if the plant was producing biomethane, the maize sustainability would be approx. 12gCO2/MJ, and the beet 16gCO2/MJ, which should be viewed against the RHI sustainability GHG threshold of 34.8gCO2/MJ. Again, the independent report concluded that these were the lowest figures the consultant had seen for this type of plant.

From the outset, Springvale Farm is a unique project, not only in its approach to securing financial backing through crowd funding, but also the ambitions implemented on-site through the use of its fish farm to grow freshwater fish for the table, and also to expand the leisure facilities – all catered for by the energy generated on-site, whilst adhering to, and respectful of, the neighbouring properties and surrounding area.

Furthermore, Nigel’s attention to detail clearly demonstrates his love and passion for the project, as well as his vision to become self-sufficient from the National Grid and build a sustainable future.

The project was recognised at the UK AD & Biogas Awards 2016, and won the ‘Best on-farm AD plant’ category award.’