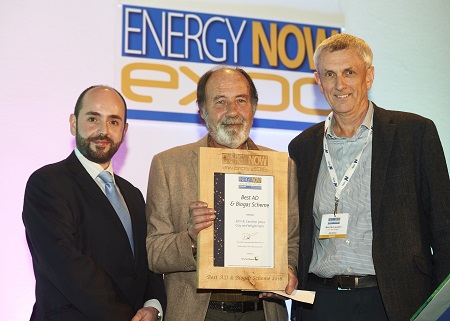 The AD scheme at Guy and Wright is unique in that it is the only commercial unit in the world where the biogas CHP exhaust is cleaned to provide CO2 for tomato growing in Greenhouse. So not only does it provide renewable heat and power but also renewable CO2.

The award categories were independently adjudicated by three industry experts, Tom Beeley, CLA renewables advisor, Dr Jonathan Scurlock, NFU renewables advisor, and Darren Edwards, Fisher German partner, and commented “the project was a great use of AD delivering multiple benefits to the business. There were also substantial carbon savings from energy displacement, use of digestate and using waste as feedstock”.

The award was presented to Guy and Wright Farm owner John Jones by the Head of Forage Aid, Andrew Ward MBE and Mike McLaughlin, Director of EnviTec, who sponsored the category award.

John, and wife Caroline Jones, donated their £500 prize money to Forage Aid, the charity that supports farmers whose livestock has been affected by an extreme weather event by providing forage and/or bedding to those in need.

Edina’s AD / biogas expert Ian Farr commented “It was great to see Guy and Wright Farm win the best Anaerobic Digestion and Biogas scheme award. The ongoing development of this plant has made a worldwide first for the use of biogas, and shows how beneficial and sophisticated Anaerobic Digestion can be to the farming industry”.

The awards ceremony took place on the evening of Wednesday 10th February and during the Energy Now Expo 2016 conference and exhibition.

About Guy and Wright Farm

Guy and Wright Farm is a small commercial greenhouse tomato producer near Bishop Storford. They have approximately 3 acres of glasshouse, and tomatoes are produced for major supermarkets.

When energy costs rocketed and many other producers were failing, the inspirational John Jones looked to alternative energy sources.

The digestion system was installed 10 years ago when the family built their own digesters, successfully collecting the gas and initially using it to run small gas turbines whose heat drastically reduced their energy bills. This process also enabled them to apply for the Renewable Obligation Certificates (ROCs).

The initial feedstock was waste fruit produced on site but this increased to include waste produce from local markets and waste organic processing sludges. In 2013 the whole process was rebuilt with the installation of new SCADA system, gas holder, biogas clean-up and 500kW CHP and the Codinox exhaust treatment system for CO2 addition to the greenhouse.

The addition of CO2 to tomato growing greenhouses is an established process and usually uses the CO2 produced in a natural gas boiler or a natural gas fuelled CHP plant. As stated using biogas in this fashion is a commercial first for Guy and Wright. This required extra design, gas treatment and analysis in order to use biogas rather than natural gas and sets a great example of a “closed loop” system in the agricultural and horticultural sector. This use of food waste to enable direct food production is unique.

In 2014 and 2015 each year the project will have produced 4400MWh of power to the farm and grid, 4000MWh of heat to the greenhouses, and supplied 1700 tonnes of CO2. The greenhouses also have a biomass boiler to further supply heat. The digestion plant is under further expansion and an additional 600kWe biogas CHP has been installed.

These Stories on Biogas